Multicolor stack light. In presence of 2 or more simultaneous alarms, the beacon lights up alternately in the colors corresponding to the events.

Universal stack light with unique communication capabilities that can work in extreme conditions.

Stack lights with reduced diameter and height with multichannel alarm with great intensity. 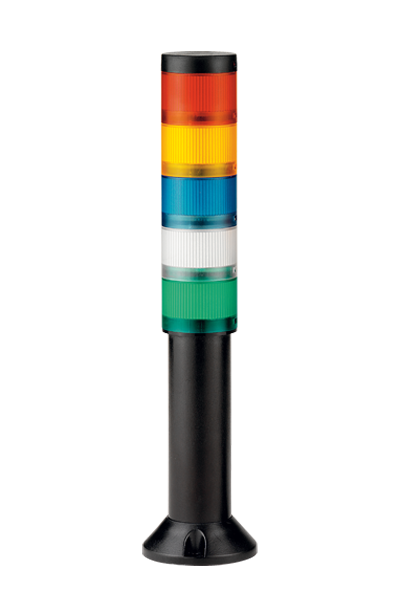 BIRTH AND EVOLUTION OF THE TEXELCO STACK LIGHT

Origins of the name stack light

The stack light is one of the electrical components which due to its configuration is identified with various names.
The European standards in force do not define them with the terms indicated but with the columns indicating the terms.
Over time, the name of stack light has prevailed among the employees, from that moment on it has been defined as such on an official level.

In the 1970s, with the advent of automation and the need to reduce production costs, the weaving departments needed to increase the number of looms that each operator had to control. It therefore became essential to pilot the workers on the machines that needed assistance.
Once this need was understood and after some tests, the first stack light and the first language of communication between man and machine was born.
The first light columns were different from the current light towers and were supplied already assembled with a diameter of 80 mm.
The already assembled stack light had advantages in the warehouse management and order issuing phase.

The stack light and mechanical problems

The presence of strong vibrations made it difficult to apply the light towers on some textile machines. To solve the problem it was decided to make the stack lights with elastic support tubes.

Light sources were also a problem, the filaments of incandescent bulbs were interrupted in the presence of shocks and vibrations. The issue was solved by adding bayonet lamp holders to the light column and using automotive bulbs.

A few years after its birth, the stack light was still a niche product but in the meantime the need for interchangeability led to the first steps of normalizing the light columns. Was born the universal fastening standard.
The need to increase safety on the machines required the use of a light tower to inform the operators about the functioning of the machinery.
The light column became a product widely used on operating machines. To facilitate the producers, a system of bayonet light modules was developed which, with a simple circular movement, allows rapid assembly in addition to the electrical connection.

As we have seen before, an important issue to solve was vibration resistance of lighting fixtures. In the mid-1990s, after a little bit of experimentation, we began to use LEDs as a source of lighting. Stack lights are probably the first standard product to make use of LEDs as the illuminating body.
At the time, LEDs were only available in three colors: red, orange and green.
The LED bulbs made it possible to solve the problem of safety signals required by the regulations. It wasn't until the turn of the century that blue and white LEDs became available. The LED stack lights returned to guarantee safe indications for all operating machines.
The use of LEDs as a light source allowed a series of signals that were previously impossible. Multifunction modules were born. Each single module of the LED light columns could provide steady rotating or flashing light signals. In particular, the flashing version was available with five different flashing frequencies.
A new step forward was made in 2003 when the first multi-color module was introduced on the market. Only one module could replace a three-color LED light column. Then, the multicolored modules were realized with the ability to also report several events at the same time.

The LED stack light to protect the environment

Texelco, in a completely voluntary way, pursues over the years a sustainable development and demonstrates this by creating products with minimal impact on the environment.
This is how the LED light columns were born, products that guarantee recyclability, repairability and reusability. The LED lighting fixtures, currently also available at high brightness, are mounted on a ba15d body and can be easily replaced by recovering the light module.